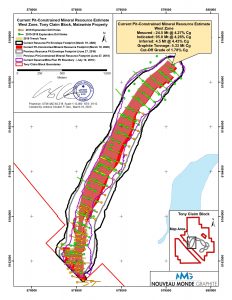 “Our 2019 surveys enabled the transformation of Resources towards almost 25 Mt of Measured Resources while enhancing our geological knowledge of our Matawinie property,” said Eric Desaulniers, President and CEO of NMG. “This increase in the Mineral Resource Estimate not only reduces the risk for our first years of commercial operations, but also demonstrates the robustness of the resource and our ability to meet the demand of manufacturers in the electric vehicle supply chain. This flexibility towards customer needs is an important guarantee of success in this market space.” Nouveau Monde’s demonstration plant, which has been operating for over a year, has shown that the Matawinie deposit contains exceptional quality ore, with a graphite concentrate that has an average graphite content of 97% and up to 99% for bigger flakes, allowing it to produce battery grade material. The Current Resource is summarized in Table 1 below and is also compared to the previous pit-constrained Mineral Resource Estimate (the “Previous Resource”) published in a press release dated June 27, 2018. This new Resource Estimate is based on additional drilling done in 2019 to increase the deposit model’s level of detail.   Table 1: Pit-Constrained Mineral Resource Estimate for the West Zone1

1 The mineral resources provided in this table were estimated using current Canadian Institute of Mining, Metallurgy and Petroleum (CIM) Standards on Mineral Resources and Reserves, Definitions and Guidelines. 2 Mineral resources are not to be considered mineral reserves as their economic viability has not been demonstrated. Additional drilling and/or trenching will be required to convert Inferred and Indicated Mineral Resources to Indicated and Measured Mineral Resources. 3 All analyses used for the Resource Estimates were performed by ALS Minerals Laboratories and delivered as graphitic carbon (“% Cg”), internal analytical code C-IR18. 4 Inferred Mineral Resources represent material that is considered too speculative to be included in economic evaluations. Additional drilling and/or trenching will be required to convert Inferred Mineral Resources to Indicated or Measured Mineral Resources. 5 Current Resource effective as of March 19, 2020. 6 Previous Resource published June 27, 2018. 7 The Current and Previous Mineral Resources are stated at a cut-off grade of 1.78% Cg. 8 The standards used for this Resource Update are the same standards produced over the course of the Prefeasibility Study (results published June 27, 2018). The difference between the Current and Previous Resources comes from new drilling done in 2019 mainly in the south-west sector of the deposit and from deep drilling. 9 Mineral Resource tonnage, grade and quantity have been rounded to reflect the accuracy of the estimate, and the totals therefore may not represent the exact sums of their components.   Modelling of the new resources will be used to optimize NMG’s mine plan while maintaining mineralization openings at depth and to the north and south. Nouveau Monde Graphite expects to update its mineral reserves in the third quarter of 2020. Various characteristics of the Current Resource pit envelope are compared to the Previous Resource pit envelope in Table 2.   Table 2: Current and Previous Resource Pit Envelope Characteristics

1 Measured length is approximate. 2 Elevation is measured above sea level or “ASL.” 3 The Current Resource is constrained within an optimized pit envelope using different parameters from the Previous Resource. The parameters used are summarized in Table 3 of this press release.   A map displaying the West Zone core drilling and trenching locations as well as a plan view of the Current Resource is available from this link. Data Sources and Current Resource Estimation Methods The block model, used to generate the Current Resource of the West Zone deposit, is based on a total of 149 core drill holes which produced 8,274 samples as well as 207 samples collected from channeling work in three (3) trenches. In all, 23 mineralized horizons encased in paragneiss units were interpreted and modelled from this data. Mineralized material classification was performed through an automated classification algorithm using search ellipsoids centred on composites. The Indicated Resource extent is based on the distance between drill holes. The total thickness of the mineralized volumes is attributed the same category. The Indicated Resource is a continuous zone measuring approximately 2.7 km long by 175 m wide. Drill holes are typically spaced 100 m apart or less from section to section and spaced every 75 m or less on the sections for the Indicated Resource zones. Drilling in the Measured Resource portion is typically spaced 50 m apart or less from section to section and spaced 60 m apart or less on the sections. All resources outside this area are attributed the inferred category by default. The Current Resource block model for the West Zone was prepared by Yann Camus, P.Eng., of SGS Canada Inc. — Geological Services (“SGS”) from Blainville, Quebec, using the Genesis© mining software. Interpolation was performed using inverse square distance (ID2) as well as different search ellipses which were adapted for the geology of the deposit. The block model was then fed to GEOVIA’s WhittleTM software to provide an optimized pit envelope constraining the Current Resource. For results comparison, the parameters used to generate the current pit envelope were the same as those used for the previous pit envelope. The parameters used for the modelling are summarized below in Table 3. Table 3: Current Resource Pit Envelope Generation Parameters.

Quality Control As mentioned in the press release issued on December 3, 2019, a strict quality assurance control protocol was adopted for the 2019 drilling campaign. An analysis of the results of the quality control samples showed that the graphitic carbon analyses for this campaign are reliable. The technical data included in this release was prepared by Yann Camus, P.Eng., of SGS Canada Inc. — Geological Services, a Qualified Person as defined by NI 43–101 Regulation. Financing The Corporation announces that the repayment of the Pallinghurst Graphite Limited (“Pallinghurst”) financing of an aggregate amount of C$2,000,000 announced on June 28, 2019 (press release) is extended to December 31, 2020 (“First Financing”). The other terms of the First Financing remain unchanged. The Corporation also announces that it has closed a new unsecured financing with Pallinghurst for an aggregate amount of C$2,000,000 upon the same terms as the First Financing being an interest rate of 9% per year and the repayment of the capital and the accrued interest fixed at the latest on December 31, 2020.  ABOUT Nouveau Monde Graphite Nouveau Monde Graphite is developing the Matawinie graphite mining project, located in Saint-Michel-des-Saints, 150 km north of Montréal, QC. At the end of 2018, the Company published a Feasibility Study which revealed strong economics with projected graphite concentrate production of 100,000 tonnes per year, with an average concentrate purity of 97%, over a 26-year period. Currently, Nouveau Monde operates a demonstration plant where it produces concentrated flake graphite, which is being sent to potential North American and international clients for the qualification of its products. In a perspective of vertical integration within the electrical vehicle market, Nouveau Monde is planning a large-scale secondary graphite transformation facility, catering to the needs of the booming lithium-ion battery industry. Dedicated to high standards of sustainability, the Matawinie graphite project will be the first of its kind to operate as an all-electric, low-carbon mine.

Subscribe to our news feed: http://nouveaumonde.ca/en/support-nmg/ Cautionary Note Regarding Forward-Looking Information All statements, other than statements of historical fact, contained in this press release including, but not limited to (i) the increase of Mineral Resources tonnage, (ii)  the conversion of  Inferred or Indicated Mineral Resources to Measured  Resources and the conversion of Mineral Resources to Mineral Reserves , (iii) the positive impact of the foregoing on project economics, and  (iV)  generally, or the “About Nouveau Monde Graphite” paragraph which essentially describe the Corporation’s outlook and objectives, constitute “forward-looking information” or “forward-looking statements” within the meaning of certain securities laws, and are based on expectations, estimates and projections as of the time of this press release. Forward-looking statements are necessarily based upon a number of estimates and assumptions that, while considered reasonable by the Corporation as of the time of such statements, are inherently subject to significant business, economic and competitive uncertainties and contingencies. These estimates and assumptions may prove to be incorrect. Many of these uncertainties and contingencies can directly or indirectly affect, and could cause, actual results to differ materially from those expressed or implied in any forward-looking statements. There can be no assurance that forward-looking statements will prove to be accurate, as actual results and future events could differ materially from those anticipated in such statements. Forward-looking statements are provided for the purpose of providing information about management’s expectations and plans relating to the future. The Corporation disclaims any intention or obligation to update or revise any forward-looking statements or to explain any material difference between subsequent actual events and such forward-looking statements, except to the extent required by applicable law.    Neither the TSX Venture Exchange nor its Regulation Services Provider (as that term is defined in the policies of the TSX Venture Exchange) accepts responsibility for the adequacy or accuracy of this release. Further information regarding Corporation is available in the SEDAR database (www.sedar.com) and on the Corporation’s website at: www.NouveauMonde.ca